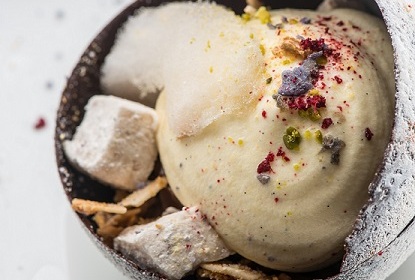 The second episode of Season Three of the Emmy-award-winning Chicago Restaurant Pastry Competition (CRPC) is now available. Episode Two went live on Monday, February 17, 2014 at midnight CST and can be viewed at http://jmpurepastry.com/VIDEO.html.

The episode, titled “Mystery Casting Challenge” follows the four pastry chef contestants, selected from among the world’s top pastry chefs, as they compete in a Sphere Mold challenge. Molds were provided by Chicago School of Mold Making, where the competition took place.

Chefs were charged with designing a composed dessert in a 4-inch sphere mold, with 90 percent of the dessert consisting of a single, cast, assembled creation and 10 percent supporting ingredients on the base of the plate. Ingredient requirements included using PreGel gelato ingredients, Nielsen-Massey Vanillas vanilla extracts, vanilla beans and flavors, Wholesome Sweeteners organic sugars and honey, and Belgian chocolate from deZaan Gourmet. Desserts were displayed on Crucial Detail plates provided by Steelite International.

“This challenge was a true test of our pastry chef’s skills on multiple levels, from casting molds to conceiving a sophisticated dessert with different textures and a complementary taste and flavor profile consistent with a composed dessert,” says event organizer and 2013 Dessert Professional’s Top Ten Pastry Chef Jimmy MacMillan. “This test was not only about creating a dessert in the sphere mold, but it also was about how to deliver it all the way to the diner, which is a central challenge for pastry chefs.” 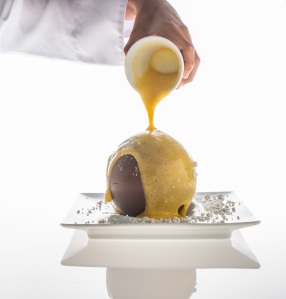 In this episode, the competitors also discuss the importance of using organic and Fair Trade ingredients, which the sponsors provided to them. “Further upping the intensity of the challenge, we required each chef use one ingredient from each category, and once an ingredient was selected from the pantry, no other competitor could use it,” said MacMillan.

Meg Galus of NoMi Restaurant at Park Hyatt Chicago in Chicago. Ill.
Chocolate Nougat
“It’s awesome that the competition has gone organic this year. At the hotel, we now use a lot of organic ingredients, which is also increasingly important to our guests. My sphere dessert is a space age play on a chocolate nougat. It’s a chocolate shell and inside is a 72 percent chocolate cream and flourless chocolate cake. I’ve included a whipped honey anglaise, some crunchy cereal bits, chewy terrone marshmallows, and cotton candy.”

Michaela Hapak of Splendido Restaurant in Toronto, Ontario
The Jamaican Bobsled
“I’m excited to use all the great organic ingredients. My sphere is whole and not cut open. It’s a chocolate shell with a bourbon orange sauce poured on top. It melts in front of you like a little show. Inside is a tamarind cake with tamarind jelly, ginger sorbet, toasted hazelnut paste and spiced nutmeg mousse.” 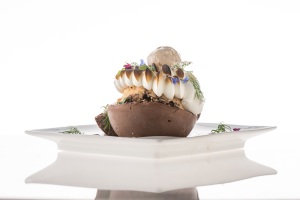 Jim Hutchison of Winvian Relais & Chateaux in Morris, Conn.
Crispy Peanut Chocolate
“I try to stick with organic ingredients when possible and love using produce from the small organic farm on our property. For my sphere dessert, I used 64 percent chocolate for the mold, and inside is a mousse with crispy peanut. There’s also whipped caramel cream layered with chocolate cake. On top is citrus meringue and ice cream, drizzled with olive oil caramel.”

Sean Pera of The Umstead Hotel & Spa in Cary, N.C.
Crystallized Ash
“It’s a huge advantage for us to use these organic ingredients. It is really important to use products that are organic, Fair Trade and non-GMO. All of those have much deeper meanings. The idea behind my sphere is volcanic ash with micro herbs and flowers growing back out of it. It symbolizes something growing out of something that is dead. It’s a black sphere and everything inside it is bright and colorful. Underneath the sphere is a black sesame crumble. Inside is a pistachio micro cake with a grapefruit curd, soymilk gelato and umabashi gelee. It is finished with fermented grapefruit foam.” 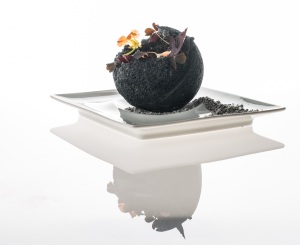 The competition is a weekend long event featuring three pastry challenges that was filmed live in September 2013 at The Chicago School of Mold Making’s creative center in Oak Park, Ill. Dubbed CRPC3 “International,” this season is the first year the competition was open to chefs from around the world.

The CRPC Season Three includes four episodes. A new episode will be released each month on JMPurePastry.com, and the winner of the competition will be announced in April 2014. Episode release dates are: January 20, February 17, March 17 and April 21.