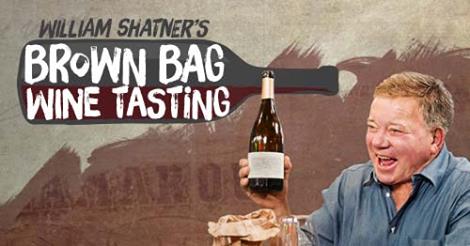 Prepare to rev up your engine as motorcycle enthusiast James Reddick talks bikes over a glass of mystery wine.

Growing up in a small town there wasn’t much to do, most of the kids James grew up with played basketball but he found his passion for bikes at a young age. In addition to riding, James began training his palate for wine when he got older, “it’s one of the oldest beverages” he explained, and wine has a lot of history behind it. James now enjoys selling wine in California.

The new Ora TV web series “Brown Bag Wine Tasting” follows Shatner’s adventures as he asks willing participants to blindly taste wine and describe it in terms of their occupations, with the goal of making the show fun, interactive and a social experience. The series was created out of Shatner’s love of wine and conversation, as well as wanting to have a fun wine tasting experience in an entertaining format. “I’m using wine as a way to explore the psyche of each of my guests,” William Shatner, the legendary Star Trek captain explains. The original series is executive produced by Shatner and Scott Sternberg who will continue in his role as the series expands with Ora TV with the addition of Ora TV executive producers, Allison Glader and Jason Rovou.  Watch this episode here.